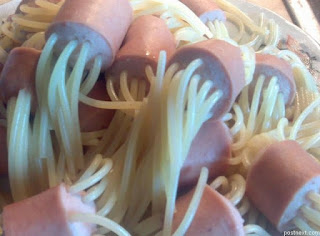 I frankly think it's a crime to serve someone ravioli filled with air and then charge them for it. There are a lot of chefs doing that these days. Grant Achatz, of Alinea, has lavendar air in one of his dishes and I wouldn't be a bit surprised if he wanted 75 of your dollars for it. Ferran Adria, the Spanish chef who's the father of foams, mists, auras and other futuristic affairs - and who injects eucalyptus air into his ravioli  -  asks for hundreds of dollars, but for what?  So you can smell the food at his restaurant, El Bulli?
I say forget about peanut butter smoke and liquid olives and all the other food borne out of the electric kool-aid acid test kitchen. You want to know what the food of the future is?
The spaghetti hot dog.
A friend of mine, Byron, sent me the link to this picture and when I saw it, I thought, 'genius.' Well, actually, my first thought was 'eeeeewww.' Then I thought 'genius' because I remembered my daughter's class is having a potluck next week, and I have to bring a main course. Have you ever tried to feed 18 6 year-olds one main course, not including pizza?
It took me a minute to figure out the ergonomics of the thing (poke uncooked spaghetti through hot dogs, boil for 10 minutes, voila!). The fact that it looks like the alien in "Alien" or a killer squid just adds to the whole freakish-yet-fun gestalt of the dish.
I figure a little knob of cheez whiz on top will make a nice cheez-y sauce. Real cheez whiz, not the essence of cheez whiz, or cheez whiz mixed with carbon dioxide to create a floating orange cloud that hangs over each kid and then bursts into a technicolor fireworks display. Although that would be pretty cool.
Anyone know where I could get some carbon dioxide?
Posted by Wendy Kaplan at 9:36 AM