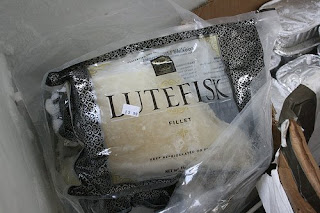 Whenever I see the word "delicacy," my yellow flag (also known as my gag reflex) immediately springs into action. Maybe it's because things like eyeballs and the scrotums of barn animals are delicacies. Delicacies are never what they ought to be: dainty chocolate truffles and sugared citrus rinds. They're usually things that make you retch.
In Scandinavia, there's a delicacy called lutefisk. I was first introduced to lutefisk on CBS' Sunday Morning years ago. The very droll reporter Bill Geist was up in Minnesota eating the stuff with a bunch of Nords and Swedes. Or rather, he was trying to good-humoredly choke it down.
Lutefisk begins as plain old cod fish(or other mild white fish, like ling). The cod is dried, and then soaked in cold water for five days. For the next two days, it soaks in a water and lye solution. Lye. The caustic chemical used to unclog toilets. The caustic fish is then soaked in fresh water for six more days, at which point it is ready to be cooked (and presumably taken off Poison Control's top ten list).
The resulting texture is - and I'm being very generous here - wobbly. Gelatinous. Like a fishy Jello mold. Depending on where you're from in Scandinavia (the north or the south), it's eaten with either a cream sauce, melted butter or mustard sauce. It's served with boiled potatoes, peas, and lefse, a Norwegian flatbread. A beiger plate you will not find.
So you already know what I did. I went to Erickson's Delicatessen in Andersonville and got me some. I also bought a tube of Arctic Caviar, which is smoked cod roe. I should have gotten the creamed and pickled herring, and had a stinky fish fest, but I was already starting to feel a little gag-y. The plump, preternaturally blond Norwegian woman at the counter gave me detailed directions, which I followed to a T. She confessed to me that she had never tried lutefisk, but that her sister and mother loved it. Here's what I think is really going on. No one in Norway eats lutefisk. It's like one of those "let's fuck with the Americans" games that the French like to play.
I did everything the package told me. I used a glass baking dish. I put foil over the top. I baked it for 30 minutes at 375 degrees. The package said the fish would be flaky. My lutefisk was gooey. And the longer I left it in the oven, the gooier it got. So, I finally decided to taste it as is.
I can't believe I was actually thinking about creating a real Scandinavian meal with lutefisk as the centerpiece. Nothing, not melted butter or mustard sauce or the best tartar sauce in the world, would make this stuff palatable. Which, I guess, is what Garrison Keillor was thinking when he called lutefisk "the biggest hunk of phlegm in the world."
Posted by Wendy Kaplan at 6:43 PM