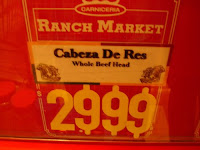 I should have called this post ¡Carnemania! because that's what Pro's Ranch Market is: an ode to meat. It's also a boisterous fiesta, with streamers hanging from the ceiling fans, Latin music, and lots of families. Big families. With 5 kids all under the age of 6, grandparents, aunts, uncles, and cousins in tow. It's a Sunday picnic in Lincoln Park, complete with the smell of smokey carnitas on the grill. The only thing missing is the soccer game.
But first and foremost it's a grocery store. I first read about Ranch Market when I was searching for authentic Mexican food in Phoenix. It's about the size of a football field, with -erias all over the place. Carniceria, pescaderia, panaderia, cremeria, salsichoneria - and of course, a tortilleria, where little Mexican women with pliable hands make thousands of tortillas everyday.
We ate at La Cocina, which is like an over-stimulated food court. ¡Pollomania! was the theme of the day. They also had street tacos and burritos, a hot buffet line, and a separate line for chicharones, which are giant sheets of fried pork skin the size of your average throw pillow. I was half-expecting a conga line to form but thankfully, that never materialized.
We ended up having some of the best salsa I've ever tasted and some of the most average tacos. I blame Rick Bayless for my lofty expectations. Bastard. The kids' meals came with steroid-injected cookies shaped like neon watermelon slices. Utterly nasty. Even my sugar-addicted kids thought so.
The carniceria, however, was fascinating (this from someone who secretly wanted to be a butcher). You can always tell how important meat is in a culture's diet by checking out their neighborhood grocery. Ranch Market has so much meat, my red blood count went up exponentially. Every cut you've ever heard of, plus many that you haven't, was on display. And every edible-but-do-you-really-want-to-eat-it part was there, too. I stared at a whole beef head, and it stared back at me, and for $29.99, I could have continued the staring contest all the way home. The beef feet came with or without skin. And the bin of beef tongue (lengua - thank you, Spanish translation website) was sufficiently stomach-turning that I went psychologically vegan for several minutes.
Average tacos aside, I was completely inspired to go cook an entire Mexican meal after manhandling every avocado in the bin and realizing they were all perfectly ripe. Too bad I didn't have a kitchen.
Posted by Wendy Kaplan at 7:22 PM