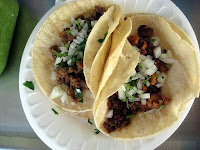 It's really helpful to have a convincing grasp of the Spanish language when you go to an authentic taqueria. For example, you wouldn't want to confuse sesos with cecina. Cecina is delicious, smokey air-dried beef. Sesos are beef brains. I did this once at a place called Tacos Veloz on Chicago Avenue. It's the kind of place that has orange formica tables with a big jar of puckery Mexican escabeche - pickled jalapenos, carrots and cauliflower -  on each one.
I have some high school Spanish, and brag (to myself mostly, because no one else cares) about how I was in honors Spanish my senior year. I also have some kitchen Spanish, which amounts to a few insulting terms for the male anatomy and the word for "buttercream frosting." But apparently, Tacos Veloz threw me a Pedro Martinez curve, and I ended up with brain tacos.
I bring this up now because we're headed to a place in Phoenix called Pro's Ranch Market. It's a giant Latino grocery store that also offers an array of Mexican items to go: fresh tortillas, tacos, corn masa snacks, and agua frescas. So I'm consulting a reputable Spanish translation website. The words for testicles, spleen, gall bladder, and stomach lining will be studied and memorized, and there may even be a test. I don't want to make the same mistake twice. I'll let you know how it goes.
Posted by Wendy Kaplan at 3:49 PM