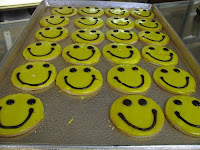 I was approached several years ago by the friend of an acquaintance to make some smiley face cookies. It seemed like a benign enough request. She was an English professor at Northwestern and seemed convivial and well-adjusted. And really, how hard could it be to make smiley face cookies? We all know what they look like. So we sat down in my dining room one evening to discuss the matter further.
She had with her a pad of paper to draw sketches, a few samples of other smiley face cookies that had failed to live up to her expectations, and a notebook filled with various fudge recipes for the facial features. She then revealed this to me.
"I eat two smiley face cookies a day," she said. "I need those smiley face cookies." She had been feeding her habit with cookies from a local bakery, Judy's. But Judy's had suddenly closed, leaving her desperate and perilously close to withdrawal.
"I can do this," I reassured her. She was relieved and then wanted to discuss the color of the frosting.
"I think yellow is the way to go," I said authoritatively.
"Of course! But are we talking daffodil? Lemon? Daisy? Taxicab? There are a million shades of yellow."
But only 64 shades of crayons, three of which are yellow, and that's what we used for reference. After some surly back-and-forth, we both agreed on Super Happy (she later claimed that she really had wanted Dandelion but that I had coerced her into Super Happy against her will).
On to the size. I brought out my round cookie cutters which came in every conceivable size, from a pinpoint to the size of Andre the Giant's head.
"None of these seems quite right," she said, but the look on my face must have convinced her that her choking death was imminent because she then said, "but the 5  7/16" is probably the closest." Fine.
We were now, after a 45 minute discussion on the color yellow and the incremental sizes of cookie cutters, starting to find some common ground. We both liked the idea of using a ganache for the mouth and eyes. Which brought us to the facial expression itself.
"Could you vary the expression?" she asked.
I looked at her face, trying to find the smallest scrap of humor or irony, but there wasn't any.
"You could do the Edvard Munch 'Scream' painting. Wouldn't that be fantastic? And then you could do other famous paintings like the Mona Lisa, or American Gothic." At that point, Van Gogh's self-portrait came to mind, simply because of the insanity connection. I told her I would give it a shot.
I would like to able to tell you that this had a happy, painterly ending, with me delivering 60 frosted cookies with a variety of famous faces piped in chocolate on them. Not the case. We ended up going back and forth on the color of the frosting and the ganache recipe, and at that point, $100 per cookie would have been fair compensation. We finally agreed that I would bake 90 cookies and deliver them plain, for $2 a piece. She would worry about the decoration.
It took me two days to roll out and bake 90 large cookies in my kitchen. I stacked them all in a cardboard moving box and brought them over to her house.  She expressed her thanks, and I expressed a concern for her mental health, and that was the end of that.
Posted by Wendy Kaplan at 11:35 AM