If this isn't heaven, it's a close approximation 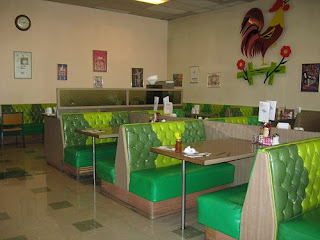 I never thought in a million years I'd want to go to Fresno. But then I read about the Chicken Pie Shop. Just the thought of a place that sells only chicken pot pies is enough to get me on the internet looking for cheap fares. The Chicken Pie Shop apparently has other stuff, too, but who cares? It's not like you're going to go there and order a reuben. That's like going to Al's Beef and ordering the southwest turkey wrap. Come on.
I have a long and deeply felt connection to chicken pot pie. Let's travel back to Marshall Field's, The Walnut Room, 1970. I'm wearing a brown velvet dress and way-too-tight party shoes. My hair is in Shirley Temple curls after an entire bottle of No More Tangles and demands to "sit still!" I'm probably still crying as my mother tries to take my picture with the huge Christmas tree in the background. But then the waitress brings me my first chicken pot pie. The crust is very flaky, and the smell is pure chickeny goodness. There are peas and carrots inside, the only vegetables I'll let near my mouth, and they have obviously been diced for a five year old. How did they know I would be visiting today?
So now you know: I'm invested. I'm opinionated. And here's what I think. The inside of a chicken pot pie should be colorful and crowded, like a Puerto Rican wedding. The sauce's role is to make sure everything - the peas, carrots, and the chunks of white meat chicken - peacefully co-exists. The sauce doesn't have an ego. It is there to make everyone else look better.
There's only one crust you can put on top of the perfect pot pie filling: rough puff pastry. It's a cross between puff pastry, which itself is too high-falutin', and pie crust, which isn't flaky enough.
I have had this chicken pot pie. A family in our neighborhood has a post trick-or-treating Halloween Hoo-Hah (sophisticated word for a gathering) where they serve, among other things, a chicken pot pie that they get at a top-secret, still unnamed specialty food shop. I actually stop speaking when I eat this pie. I sit in quiet reverence and wonder, would it be unseemly if I had more than three helpings? The filling is a colorful and crowded 10, the crust is a 9.95 (a little more flake would vault it right over the top), and I just do everything in my power to remain in their good graces, because I do not want to be left off that invitation list.
But since Fresno is far away, and Halloween even farther, I'll just think about chicken pot pie right now. Or maybe I'll make one. I'll keep you posted.
Posted by Wendy Kaplan at 7:41 AM