Mmmmm, steak (as only Homer Simpson would say it) 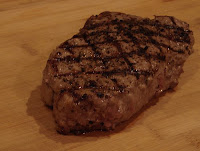 If I wasn't so afraid of angioplasty, I'd be having a steak right now. I think steak is the elixir of life, even if it's also the hastener of death. Life is full of ironies.
My first experience making a steak was with SteakUmmm's (I can't remember how many m's there were, but the more m's it had, the tastier it was). Whether SteakUmmm's was truly steak is up for discussion. I think it contained some steak or it would have been called Steak-likeUmmm's or SavoryUmmm's or some other innocuous name the chino-wearing brand manager conjured up during an alcohol-fueled dinner meeting at Applebee's. I know that White Castle calls their "fish" sandwich the DeepSea, and if that doesn't alarm you, I don't know what will. You could be eating breaded coral, or fish leavings, or toxic waste, or pieces of electrical cable that have fallen off an oil tanker. If you're Jewish, you would call this sandwich the BottomDweller.
As for my SteakUmmm's, I would cook the thinly sliced steak-like product in a teflon pan, and then layer it on a toasted sub roll with sauteed onions, a sprinkling of parmesan and a little mayo. There were no juices to mingle with the mayo and the onions, but the idea was there.
I've recently discovered the flat iron steak. Apparently, it's the new darling of the restaurant kitchen. It's also the new darling of my kitchen. As an affirmed flank steak lover, I found it pretty hard to believe that there was a better cut for me. But the flat iron is so great, it's almost as great as chocolate cake. It's flavorful, tender, easy to eat, and doesn't have troubling pieces of fat or obvious blood-filled veins running through it, a definite drawback with flank. Also, you don't have to chew each piece for 20 or 25 minutes just to get it into a digestible state, like you might with skirt steak.
Of course, now I can't find it anymore. Whole Foods, those nasty bastards, carried it for one glorious week but now that bbq season is here, it's gone. If you see one, please call me. It's in a cryovac bag and it's as handsome as George Clooney, and apparently about as available.
Posted by Wendy Kaplan at 10:33 AM