Bringing back the dead 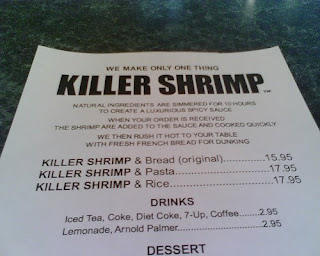 It pains me in a small way to write about a place you'll never be able to visit. But maybe, just maybe, you can recreate what made the now-defunct Killer Shrimp so great in the first place. God knows, it wasn't the ambience or the room. Killer Shrimp was on the second floor of a strip mall in Venice, California. You sat on the "patio" inhaling exhaust fumes from cars passing by and wisps of gassy smoke from the tiki torches.
The shrimp, however, was devastating. It was the peel-and-eat kind and it came in broth. Broth is such an inadequate word here because what we're really talking about is a seductive, hypnotic potion that flirted ever-so-slightly with evil. I'm losing focus just thinking about it. It was buttery with a hint of rosemary, garlic, and tomato, and had a bad boy heat that was more like a push and a shove than a gimpy kick. They also gave you a big bowl of sliced baguette to use as you saw fit.
I won't even discuss the other two versions - rice and pasta - because the shrimp came peeled. The whole point of the seductive, hypnotic potion was to envelope you and osmose into your pores and affect the way you think and feel about the world as you peeled. At least that's what happened to me.
I found this recipe among several others claiming to be the genuine article. I had a karmic Killer Shrimp connection to this one, so I will be making it this weekend. If you don't like shrimp, make the seductive, hypnotic potion anyway. Pour it into a couple of glasses, and drink it. You won't be sorry.
Killer Shrimp
2 Tbs. rosemary
5 cloves garlic, chopped
1 tsp. ground black pepper
1 tsp. crushed red pepper flakes
1 tsp celery seed
1/2 tsp fennel seed
1 cup white wine
2 quarts chicken broth
8 oz. clam juice
3 oz. tomato paste
1/2 pound butter
2 lbs. shrimp, shells and tails on
Roughly chop the rosemary and fennel seed. Place all the ingredients except the wine and the shrimp in a large pot. Simmer for about an hour. Add wine and continue to simmer for about an hour more. Just before serving, add raw shrimp and cook for 2 to 3 minutes.  Serve a big ladleful of broth and a bunch of shrimp in each bowl, with sliced baguette (nothing too fancy here) on the side.
This is enough for 4 or 5 or even 6 people, but I could eat the whole thing myself, with a large bowl of sliced Gonnella bread and a cold beer.
Posted by Wendy Kaplan at 11:00 AM