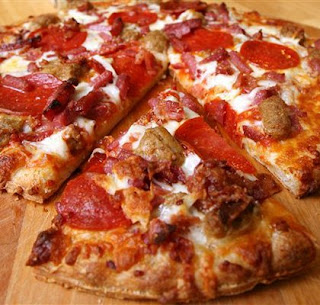 I truly enjoy seeing the mighty fall. I relish it so much, I would pull up a chair and eat popcorn while watching someone with a giant, insufferable ego eat some stringy, unpalatable crow.
That happened today - sort of. GQ came out with its list of the 25 Best Pizzas in the country. Up until now, Pizzeria Bianco, in Phoenix, has been the darling of the pizza world. I bought into the hoopla, too, spending two days of my five day vacation in Phoenix pursuing with a weird, zealot-like fervor the lauded pies of Chris Bianco. I seriously considered waiting in line for five hours to get a taste of his version of flour, yeast and water topped with a little tomato sauce and cheese. In the end, my child yanked me back into reality, and we ended up going elsewhere.
But I honestly felt yanked around by Pizzeria Bianco. They believed their own PR. Not that the pizza isn't fabulous - I'm sure it is - but it's pizza. And if five hour waits are the norm, they should expand so no one has to wait more than half a workday for a piece of their pie.
On GQ's list, Pizzeria Bianco is #4. Not exactly a proud position for a place that has held the title "Best Pizza in the World" for years now. Alan Richman, GQ's food critic, may be a knob for all I know. But who cares? Being cut down to size in the media is worth its weight in housemade prosciutto. It's now out there: Pizzeria Bianco is not #1.
So who is? Great Lake Pizza (see deliciousness above), a child of my fair city, Chicago. It's not Chicago-style pizza, but that actually tickles me to death because I now know that Chicagoans other than Grant Achatz can be at the fore of culinary progress. Achatz' super futuristic restaurant, Alinea, with its esoteric now you see it/now you don't cuisine, is one way of moving forward. Taking Chicago pizza to the next level is another.
Check out the article here. The large, Pizzeria Bianco chip on my shoulder has been mercifully lifted, which is a good thing because I was beginning to think I needed a chiropractor. I believe justice has been served.
Posted by Wendy Kaplan at 10:59 AM