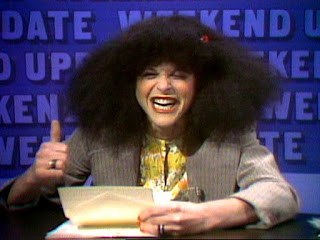 Left to its own devices, my hair, in the Chicago summer humidity, would look not unlike Roseanne Roseannadanna's. For her, it was a theatrical wig. For me, it's a genetic flipping of the bird at me by my father's side of the family. Thanks, Dad.
But interestingly, there is a correlation between my hair and the eating of gazpacho. On that first moist, frizzy day, I know instinctively it's time to pull out The Recipe. I have deemed it a proper noun because this Recipe is a miracle in alchemy.
But let me back up a bit. Gazpacho is cold Spanish tomato soup, and there are a thousand versions, some with bread, some with cucumbers, some pureed, some more Sangria-like, with chunks of tomatoes and cucumbers in a thin tomato broth. I've seen white gazpachos and gazpachos with grapes and almonds. But I'm a purist.
Gazpacho happens to be one of the loves of my life, along with my now-deceased cat, Chuck, and diet Coke, so you're not going to talk me into liking your version better than my version. My version also happens to be Nancy Silverton's version. She's my idol, and also happens to have Roseanne Roseannadanna hair, which could explain why she has spent so much time developing the best gazpacho recipe on the planet, so much so that it is now a proper noun, much as the Pope or God is a proper noun.
Nancy's recipe is one of those "the whole is greater than the sum of its parts" propositions. It's a bunch of delicious ingredients mixed together with one's hands (the best utenstils), and left to marinate overnight.
Not to sound too new age-y, but there is a Happening in the bowl overnight. Something actually transpires between the ingredients that is other worldly. It's almost like Clark Kent turning into Superman, or whatever that guy's name is turning into Spiderman.
So here's The Recipe. It's not quite tomato season yet, but a few ok ones are just starting to turn up. So if your hair's frizzy, go ahead and make this, knowing that great tomatoes - and even better gazpacho - are just around the corner.
Nancy Silverton's gazpacho
adapted from The Food of Campanile by Mark Peel and Nancy Silverton
2 Japanese cucumbers , split and seeded (these are the long ones that are usually wrapped in tight plastic)
1 small fennel bulb, trimmed (i.e. cut out the core)
1 medium red onion, peeled and trimmed (ditto)
1 medium red bell pepper, cored and seeded
1 small green pepper, cored and seeded
1 large celery stalk
3 pounds ripe tomatoes, cored, seeded and quartered
1 small jalapeno pepper, split, seeded and diced (this is optional, especially if you're not into spicy food)
1/2 cup good olive oil
1 bunch fresh basil, 8 leaves reserved
1/4 cup good red wine vinegar
4 large garlic cloves, peeled and crushed in 1 tsp olive oil
Kosher salt and freshly cracked black pepper
Chop the cucumbers, fennel, red onion, red and green bell peppers, and celery into 2 inch pieces. Combine them with the tomatoes, jalapeno, olive oil, basil, vinegar, garlic, 1 Tbs. kosher salt and 1 1/2 tsp. black pepper in a large plastic or stainless steel container. Cover with plastic wrap and refrigerate for 12 to 24 hours, tossing once or twice.
At this point, Nancy uses a food mill to puree the soup. You really need a professional strength mill if you're going to go that route. I use a food processor, and buzz it through until it's coarsely ground. It's not thin like a traditional soup; it will be sort of chunky. At this point, taste it and add salt and pepper if needed.
Julienne the remaining basil leaves and garnish each serving with the leaves. Grilled shrimp is also a great garnish, sort of a riff on shrimp cocktail.
Posted by Wendy Kaplan at 10:23 AM