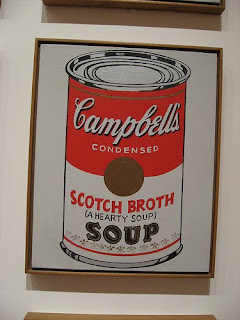 I'm in inspiration mode right now. I'm trying to find the answers. Which translated means, I'm trying to find some more interesting things to write about. I'm taking a lot in. A friend sent me a link to a website that showcases, among many other random things, school lunches from around the world. That definitely deserves a post, especially because kimchi is a popular school lunch side dish in Korea. I love kimchi, and I love that it's Korea's cole slaw, and wish it was America's cole slaw, but I also can't imagine my kids smelling it, much less eating it.
Scotch broth is inspiring me, too, and no it's not broth with scotch in it, although I know a few people who might put scotch in their scotch broth. It's an old-school Campbell's Soup flavor that's been reissued, if you will. The first ingredient (or maybe second - I can't remember) is mutton broth. This in a can of Campbell's Soup. The word mutton brings to mind Billy Crystal's character in The Princess Bride, who waxes gastronomic about a mutton, lettuce and tomato sandwich, where the mutton is nice and lean. I'll stick with my beloved bacon to accompany my l and t, thanks. As for scotch broth, if it's good enough for Andy Warhol to paint, it's good enough for me to eat.
Campbell's also used to have Pepper Pot Soup, which is made with tripe. I didn't see it at Jewel, but if I had, I would have left that one on the shelf. You know how I feel about varietal meats.
And I've been throwing around the idea of opening a subscription soup business where one could place weekly orders online and delicious soup (but not Pepper Pot) would be delivered to their door. Wouldn't it be nice to have homemade soup brought to you on a cold winter's night, maybe with some homemade bread? There's definitely something to this.
I also have yet to tell you about my  somewhat unhealthy relationship with parsley, and the seductive parsley soup I make (thank you, fancy chef Jean Georges Vongerichten, for your recipe) that is hypnotic, to say the least. So stay tuned....
Posted by Wendy Kaplan at 10:39 AM