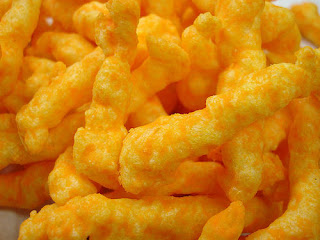 I'm beginning to think it would be safer to let my 9 year-old son have the keys to the car than to let him pick his own food. The child obviously has a death wish. Here's what a typical day would look like in the diet of H. if he had his druthers:
Breakfast:
4 graham crackers
1 Krispy Kreme donut
2 slices of bacon
Snack:
1 small bag Lay's potato chips or better yet, Pringle's
Lunch:
Lunchables (whichever one has the most chemicals)
Snack:
entire sleeve of graham crackers, handful of Lay's potato chips or better yet, Pringle's
Dinner:
cheeseburger
onion rings
one chicken nugget stolen from sister's stash
Dessert:
leftover cupcake from birthday party (while negotiating for additional ice cream cone)
Why do children like crap so much? Forget about the fact that I let them have crap (sometimes). Why do they want crap in the first place? What is it about the young palate that wants Gripz and Cheez-Its and cheese popcorn and Flavor Blasted Doritos? Are the food companies putting heroine in the cheese powder? And what's the obsessive attraction to squishy white bread? They now make wheat bread that's practically white bread, so what's the problem?
And why does nothing ever change? I liked crap, too, when I was 9. I was the queen of Hostess and Chef Boyardee. I didn't eat a vegetable until I was in my 2o's, if you don't count the 7 corn kernels that came in my weekly Swanson's frozen dinner.
It must be physiological. Or anthropological. Or maybe it's diabolical. Maybe food scientists have figured out the genetic code for the under-17 palate and how to subvert it. Maybe we're all just unwitting junk food drones in a Kurt Vonnegut novel about the subjugation of an entire nation through salty snacks.
So what to do? I do what most mothers do: surrender and offer up a gummie multivitamin. Then I sneak kale into their hot fudge sundaes when they're not looking.
Posted by Wendy Kaplan at 8:37 AM