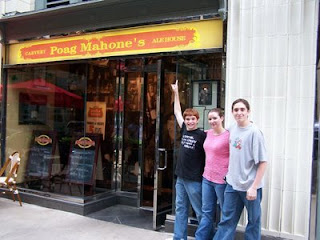 *I have no idea who these people are.

Today was the second official meeting of the Burger of the Month Club - Chicago Chapter. We met at Poag Mahone's, which means "kiss my ass" in Gaelic. I sort of felt like the management was telling me to kiss their ass when I tasted the burger. It had the consistency of meat, and the look of meat. It just didn't taste like meat, or anything else for that matter. So my question at that point - at the point when my food doesn't taste like anything - is, Could someone please pass the freaking salt?
How hard is it to salt food properly? Seriously, it's the cheapest ingredient in the kitchen, and it requires no culinary school techniques whatsoever. Food doesn't taste like food until it's been salted. So, please, for God's sake, salt the meat. Then maybe I'll think about kissing your ass.
Maybe I'm just pissed off about having to drink diet Pepsi instead of diet Coke. Whenever a place serves Pepsi, I think someone must be getting kickbacks from Pepsico. Because everyone knows Coke is far superior to Pepsi. Especially with a burger. The only time I'm going to voluntarily have a diet Pepsi with my burger is never.
As for the accompaniments, the fries were standard, crinkle cut bar fare. I thought the coleslaw was good, but others thought it was merely ok. And I've already lambasted the soda selection. Right now, I'm feeling like Poag Mahone's can poag my mahone.
Plus, the six members of the Burger of the Month Club who attended the monthly meeting were pretty much rendered mute because the place was so loud, we couldn't hear each other, so we just stopped talking. (It was good to see you all, by the way) Fortunately, ESPN was on 2 of the three TV screens, so I got to catch up on my baseball stats.
My final thought is, where was Bruce Jenner when we really needed him?
Posted by Wendy Kaplan at 2:43 PM