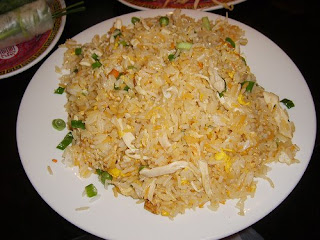 There's a Chinese waiter somewhere in the world who remembers this story very well:
Back in 1982, some high school friends of mine and I went to Ming Garden one night for dinner. Ming Garden was in a strip mall in North Dallas, the land of pageant hair, Chevy Broncos, and the least authentic Chinese restaurants in the country, if you don't count the ones in New Hampshire, where they unapologetically serve Parker House Rolls before your chow mein.
Our waiter that night was a young, skinny Chinese guy who had a big, scarlet "V" on his forehead. The "V" was for virginal. I say this not as a judgment on his sexual state, but on his life state - he was a life virgin. He was giddy and easily embarrassed, red-faced and giggly, especially in the presence of high school girls. He had fluffy, black hair and a bit of acne on his cheeks. It was hard not to feel for this awkward man. I'm sure this - three high school girls sitting at one of his tables -  was about as much action as he ever got.
We ordered our food (he giggled) and our Cokes and 7 up's (giggle, giggle). He was over-solicitous, and we were over-flirtatious and soon, the dynamic started to take on a life of its own.  The food and the room and the clientele at Ming Garden was alarmingly uninteresting, but the fact that we could elicit such a jumpy response from this preternaturally embarrassed man child was highly entertaining.
At the end of the meal, there was a good amount of fried rice left. It was average fried rice at best, and I had no intention of eating it beyond the muraled walls of the Ming. But something came over me at that moment, and I can't be positive, but I think it was the devil. The devious, self-serving devil crept into my brain and told me to do something so outrageous that this shy Chinese waiter might just blush himself to death.
So when he came back to the table, I asked him if I could take the rice home. He giggled and said "yes," and so with that, I took the silver plate of rice and scraped it into my purse, filling my black Le Sportsac with what remained of our shrimp fried rice.
He shrieked. My two friends shrieked. He was at a complete loss, standing there with his mouth open so wide, I had a pretty clear shot of his uvula. Then he yelled, "We have box for that! We have box for that!" And he ran into the kitchen to grab the box. I acted like I had never seen such a box, and then smiled and reassured him that it was OK. By that point, he had broken a pretty good sweat, and I wouldn't be surprised if he walked off the job that night, and went to work for a dry cleaners. Less client interaction, with much older clients.
The Le Sportsac ended up in a dumpster that night. But that story will, I'm sure, be with the four of us forever.
Posted by Wendy Kaplan at 7:29 PM