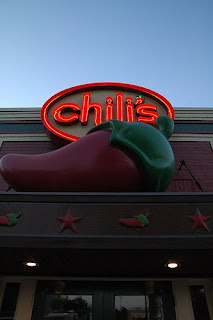 I now know where all the salt from my Poag Mahone's cheeseburger went: to the stockpiles at Chili's, the Texas-y food chain with the gigantic red chile mascot. Everything on the menu should be preceded by the tantalizing descriptor "supersalty." When I come home from a dinner at Chili's, I'm so water-retentive, my calves have doubled in size, and I'm spongey.
The sad part is, Chili's used to be one of my favorite places, before it was taken over by corporate chefs. Back in the day - Dallas in the early 80's - there was one lone Chili's on Greenville Avenue. It was a shrine to Texas chili, with old black-and-white photos of codgery guys holding up their chili cook-off blue ribbons.
The menu starred The Terlingua Pride - a manly chili cheeseburger. The chili soft tacos were somewhat less showy, but still chili to the core. And the chili cheese nachos were what we, as teenagers, ate with the occasional beer we finagled with our fake ID's. This place was the real deal.
But then Norman Brinker bought it, and in 1983, started to expand. He's the guy who created Bennigan's and Steak & Ale, before making Chili's a multinational conglomerate with little satellite outposts in airports, sports stadiums, office parks, and God knows where else - public restrooms? Your urologist's office?
And then the corporate chefs rolled up their sleeves and dug in. The job of the corporate chef is to make the food fit the brand. It's a dubious job at best, and a shameful one at worst. Here, I'm thinking the Awesome Blossom, a whole deep fried onion that spouts individual fried onion stems to pluck and dip in some questionable test-kitchen sauce.
As for the Awesome Blossom, here's probably what went down: a bunch of marketing guys, some with early 1990's ponytails, and a "chef" with "Chef Tom" officially embroidered on his preternaturally white chef's coat, sat in a large, windowless conference room. The moderator stood next to an easel with a big black marker while the participants threw around terms like "brainstorm" and "groupthink" and after a few hours, someone held up a doodle drawn out of boredom on his yellow legal pad and the Awesome Blossom was born.
I'm fairly certain the Chicken Club Tacos with bacon (Country Club double decker sandwich, meet the local taqueria) and the Crispy Chicken Crisper Tacos (more crispiness than you ever thought possible) were both conceived in the same low-lit yet decidedly unromantic room.
I miss the old Chili's. But chains are created, character is exchanged for corporate concepts, children's menus are mass produced, salt is liberally used, and life goes on.
Posted by Wendy Kaplan at 9:20 PM