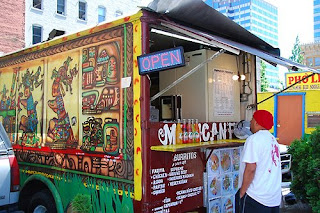 I never thought I'd say this but, I want to start eating out of trucks more. I think my deep, abiding love for truck food began with the catering trucks I encountered on commercial shoots. I actually stayed in advertising way longer than I planned because the thought of giving up the catering truck - and breakfast burritos made to my specifications - was too much to bear.
But now the genre is going mainstream, and no one is more stoked than me. The first inkling I had of the mobile food revolution came several months ago when I first read about The Dessert Truck. 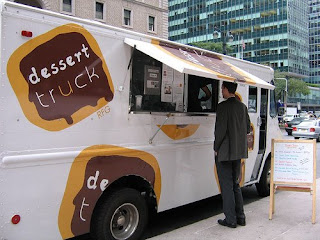 I was understandably enthralled. The Dessert Truck is a mobile pastry shop of the highest order that tools around New York City, doling out creme brulee and warm chocolate bread pudding. Two guys - a pastry chef from Le Cirque and a grad student - started the venture with $100,000 and an apparently stellar business plan.
The Dessert Truck defies convention by offering things like goat cheesecake with rosemary caramel and chocolate mousse with a creamy peanut butter center and caramelized popcorn in, of all things, cheap foil or paper muffin cups. Practical meets fanciful. Truck stop meets haute cuisine. I'm all for it. 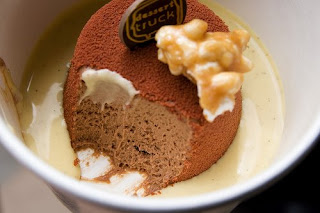 Soon after, I discovered the Portland food cart scene, which is the most organized mobile food community I've come across. There's an epicenter website dedicated to the what, when, and where of the vendors, with more information than you could ever possibly need. Are you jonesing to cook in a 3' x 5' kitchen on wheels with propane and precious little ventilation? There's a used food cart want ad section just for you. I have a feeling it's a tough racket because there's always something for sale.
The vibe in Portland is street food all the way, with lots of ethnic carts (tacos, Vietnamese Pho) alongside more inventive ones like Grilled Cheese Grill (name pretty much says it all) and Moxie Rx, a breakfast/brunch place that's homespun and gourmet at the same time. 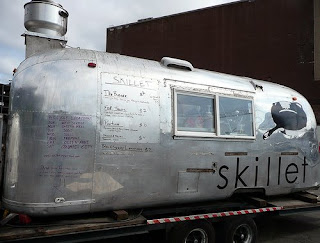 But the most intriguing of all the food trucks is Skillet in Seattle. Skillet Street Food was created by a former CIA graduate (culinary student, not spy), so he has some chops. He serves higher end comfort food in a refurbished Airstream with a cool logo on the side. You can check their website for their daily menu and locations.
The signature Kobe burger with arugula and cambazola cheese (a mild blue) is slathered with something called bacon jam, a concoction the chef dreamed up and now sells on the Skillet website. I already have my jar, and am formulating a bacon jam plan as we speak.
As intriguing as bacon jam is, poutine is even more so. A classic Canadian diner dish, it's french fries covered in gravy and cheese, which melt and mingle, and the whole thing turns into something magical that you'll probably want to eat with a fork and a bunch of napkins. 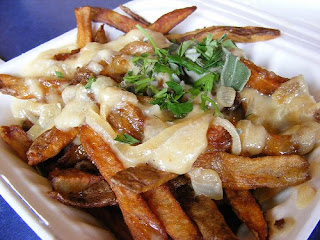 No one in my family knows it yet, but I'm planning a mobile food road trip. I'm going to eat my way from truck to truck all in the name of research and development. Chicago could really use a Skillet, and I might want to be the one to make it happen.
Posted by Wendy Kaplan at 5:45 AM