Hate the regime, love the food 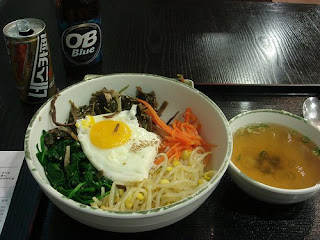 Man, I wish that Kim Jong-il wasn't such an a-hole. His crazy motherfucker antics would be mildly amusing if he wasn't pointing an a-bomb at Honolulu. And, for obvious reasons, watching a thousand goose-stepping soldiers march through the town square doesn't exactly make me feel all calm inside, either.
But, boy, do I love Korean food. I first got a taste at Steve's Lunch in Ann Arbor during college. Ann Arbor is pretty much the epicenter of Korean food in the U.S., or so it seems. There are more Korean restaurants than Chinese restaurants in Ann Arbor, which I could chalk up to who's going to school there. But it also made me wonder: is Kim Jong-il infiltrating American college campuses with the very convincing method of plying unwitting, hungry students with Korean barbecue to get them to join the cause?
Until you've tried bul go gi (Korean for "this is fucking awesome"), you can't understand how possible that is. Paper thin slices of ribeye are marinated in one of those transformative marinades made sweet with kiwis, salty with soy sauce, and tangy with rice vinegar. The pieces of meat are cooked quickly over a smokey fire, and then wrapped in lettuce leaves and devoured.
This is the stuff from which addictions are made. And borne from that are citizens in drab gray garb, wearing solidarity arm bands and worshipping their "Dear Leader," with goose-stepping soldiers not far behind. That is the power of bul go gi.
So eat with caution. And just know that Vietnamese barbecue is similar, and as far as I know, they're not enriching plutonium as we speak.
Posted by Wendy Kaplan at 9:30 AM