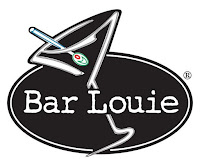 Sometimes I feel like this is turning into a cheeseburger blog. I do like to eat other things, even though I spend a heck of a lot of time talking about cheeseburgers. I like seafood a lot. I love ethnic food, as long as it doesn't include monkey brains, spinal fluid or the like. I really love sandwiches. But if I had to pick the perfect food, it would be the cheeseburger. It's just a damn satisfying way to enjoy a cow.
But sometimes I just want a salad. It's almost a primitive yen, the gatherer part of the hunter-gatherer equation calling out for a turn. There's a part of me that knows my body will stop functioning if I don't get some vegetation in it right quick. So in that spirit, I'd like to thank Bar Louie for coming up with Burger in a Bowl. That's its technical name; I call it the Cheeseburger Salad and boy, what an inspired concept.
It starts with a bowl of chopped iceberg lettuce. Say what you will about iceberg: it has no nutritional value, it's mass produced, etc, etc... But iceberg, in all its crunchy blandness, is the perfect foil for a greasy, cheese-laden burger. Next come "bruschetta tomatoes," which are chopped tomatoes dressed in a puckery vinaigrette. Sometimes burgers need a good, tart butt-kicking, and puckery vinaigrettes were made to do just that.
Now comes the hard part: picking the meat. You could choose not to rock the boat by picking beef. You could also go all healthy and have a turkey burger. A veggie burger is also available, and since this is mostly a vegetarian dish, I'm going to remain neutral on the veggie burger thing. A fourth option is a chicken breast, but how that's a "burger" in a bowl is beyond me. This is not an option, in my opinion.
But the meat is just the beginning. You must also select a style of burger, and at Bar Louie, there are seven or eight pretty heady options.  The Fried Louie, for example, is bacon, cheddar and a fried egg atop a burger, which would then be atop the chopped lettuce and bruschetta tomatoes in the bowl. I know; it's a lot to take in.
My favorite style is the Philly, which is grilled mushrooms, onions and provolone, but the Louie (grilled onions, provolone and giardiniera) is swell, too. You really can't go wrong, unless you order the chicken breast, which we've already established is a misguided choice and perhaps even sacrilegious as the star protein in Burger in a Bowl.
The whole thing is then topped off with pickles, red onion, mixed cheeses and house dressing, and what it all amounts to is a fine, fine meal. I don't know if Charlie Trotter would jump on this bandwagon, but who cares? He messed around a bit with the whole raw food thing, and what a bunch of bollocks that was.
When your Burger in a Bowl arrives, do as a parent would for a child: cut the whole thing up first, and then eat it. If you cut it up as you go, you might not get to enjoy the interplay of tastes, textures, and temperatures. And every bite is different, which is also part of the genius.
I'm heading there tomorrow. Maybe this time, I'll get the Pepper Jack: pepper jack cheese, guacamole and jalapenos. I'll try to take a picture, although this salad is not a looker. But its personality more than makes up for it.
Posted by Wendy Kaplan at 12:43 PM