Where the hell is my hot towel? 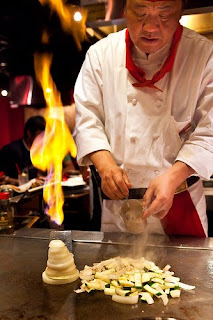 We went to Benihana the other night for my son's birthday. There is something so reassuring about that place. I think it's the routine. You get there, they seat you with a couple of overweight strangers with umbrella drinks who try to talk to you until you make it very clear you want nothing to do with them. The Japanese server - a petite woman in her late thirties, maybe a former geisha - brings you a hot towel for your hands, and you end up giving yourself a sponge bath from the neck up, and cleaning out your kids' ears. The next table over is mid-meal, the onion volcano is just starting to let off steam. The.......WAIT! There was no hot towel!
I didn't even realize it until we got home. We were wondering how to get the smell of hibachi shrimp out of our clothes when it hit me. How can you have a Benihana meal without a hot towel? And come to think of it, they changed one of the sauces, too. The mustard-y sauce is now a mayonnaise-y sauce. What gives?
And.....why is my chef a latino guy named Omar? Where's Takashi, my own personal master chef, trained in the old country? I mean, Omar was fine, he stacked up the onions just right, he flipped the shrimp tails into his toque with confidence, but when he bowed at the end, I felt a little cheated.
A few years ago, my father boldly proclaimed he would never go to Benihana again because it wasn't authentic anymore (he had had a problem with having a "Japanese" chef named Juan). At the time, I just chalked it up to his annoying racist tendencies. Was Benihana - the American institution - ever really authentic? Does it really matter who cooks your meal as long as they get the flavors right?
Our Omar did a few things differently. He cut the zucchini into trapezoids instead of thick julienne. Didn't like that. The zucchini is supposed to co-mingle with the onions, and that happens when the two are shaped similarly (the master Japanese chef above has it right, particularly with the addition of the sesame seeds).
Omar also put a dollop of some white stuff on my shrimp. It looked like sour cream, but I think it must have been pure trans fat because the shrimp looked and tasted the same. Only my arteries know for sure. He also offered us a weird pre-meal appetizer, which he claimed was a "Japanese potato." The translucent white slices literally hopped up and down on the griddle, and then into our plates. They had a Jello-like springiness and tasted like nothing.
Still, the question lingers: does the chef at Benihana need to be Japanese? What if I went into a taqueria, and a Japanese guy was making the tortillas? Would it take away from the experience? Or what if I went into a Jewish deli and an Indian guy was making the corned beef sandwiches? What if a Jewish guy was making the curry at my favorite Indian restaurant? In a self-proclaimed ethnic restaurant, must the creators of the food be the proclaimed ethnicity?
I'll go back to Benihana, and I don't really care whether Omar or Takashi is cooking. No one makes hibachi shrimp like Benihana. But I do know one thing for sure: I want my hot towel back.
Posted by Wendy Kaplan at 9:24 AM