Mystery of the black sandwich, solved 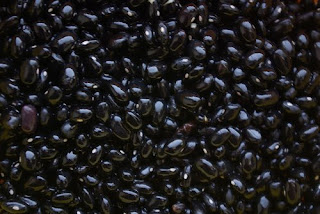 So much for blood sausage.
I wrote a post several weeks ago about a certain sandwich with a suspicious black filling. It belonged to one of my daughter's kindergarten classmates, "Esteban." At the time, I thought Esteban was Spanish (turns out he's Colombian), and thus suspected the ominous black goo in between the slices of white bread to be blood sausage, or blood something, given that Spain heartily embraces blood in many culinary forms. For all I know, the Spaniards embrace other bodily fluids, too, but to be honest, I'd rather not know about this. Eating blood is about all I can stomach on an early Sunday morning.
Yesterday, I went to the source: Esteban's mother. Just as I suspected, she was more than happy to talk about her son's diet. If you're a mother, you understand this.  We mothers can converse for marathon amounts of time regarding what our children will and will not eat. We lament, but we also brag: Would you believe my daughter only eats four things, but one of them is calamari? Or: my son only eats food that's brown, but he will eat sushi rolls as long as I take out the fish, the avocado and scrape the rice off the outside because it reminds him of bugs. That sort of thing.
She told me that beans are a big part of the Colombian diet, but that's not why she makes Esteban these frankly unappetizing black bean sandwiches. It turns out the filling, which is mashed, cooked black beans to which she adds a pinch of brown sugar and some chopped spinach, is like edible superglue. Esteban has a habit of deconstructing his sandwiches and throwing the filling in the garbage. But one would need a crowbar to pry apart a sandwich made with black bean mortar. Plus, Esteban likes the taste.
So there you have it. A problem-solving mother with the creative genius to turn two pieces of white bread into a meal both the American Academy of Pediatrics and the International Federation of Bodybuilders would heartily endorse. Mothers do know best.
Posted by Wendy Kaplan at 8:30 AM