When Bruce Jenner comes a knockin' 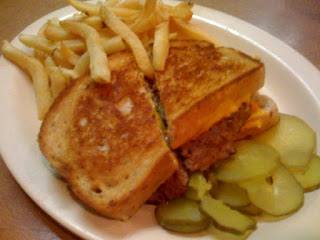 I went to the first meeting of the Burger of the Month Club, Chicago chapter, completely confident that I would immerse myself in burger gestalt and nothing else. TopNotch Beefburgers seemed like just the place to do that. It's a dumpy restaurant on the South Side where you can wallow in the meatiness of the meat. The squishiness/toastiness of the bun. The hallowed deliciousness of the condiments. But there was another, more pressing issue.
We had a visitation. Bruce Jenner appeared on a pickle slice. 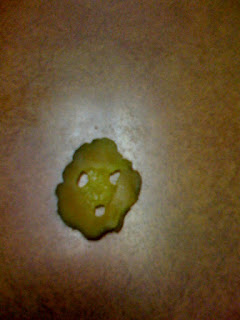 We all saw it. The weirdly empty button eyes. The shiny, taut post-op skin. The cutesy elfin nose that sadly cried out, "I just want to be a little girl!"
Perhaps it was a sign of the fall of modern civilization. Or maybe, Top Notch Beefburgers puts so many pickle slices on every plate, it's statistically likely you're going to spot a celeb. If it wasn't Bruce Jenner, it would have been Elton John or Larry King. Or Billie Jean King. Or Don King. There were a lot of pickles.
I ordered a patty melt and would hold it up against any gold standard patty melt around. The rye bread which, to me, is the defining element of the patty melt, was toasted just right. Not too soft, not too crunchy. There were two slices of cheese - one on top of the patty and one on the bottom - and just the right proportion of grilled onions. The meat itself was more juicy than greasy, and sized just right to balance harmoniously with the rest of the elements, in a Zen kind of way.
As for the burgers, several BOTM members got the double cheese and the rest got a single burger. The bun on the double was very impressive. I've never seen such evenly scattered sesame seeds, which I can only attribute to having an anal retentive seed scatterer on the job. There was no shortage of lettuce, sliced onion, and tomato for those who like a little vegetation with their burger. The general consensus: Top Notch produces Top Notch burgers, with one dissenter, who deemed it OK Notch.
I'd also like to give a head nod to my Diet Coke. It was a lovely mix of syrup and carbonation. I'm a stickler for this. A fellow Coke drinker had the same bubbly good experience.
I took possession of the Bruce Jenner pickle and what happened in the hours following was disturbing, to say the least. Let's just say the aging process was not kind to Mr. Jenner.
Posted by Wendy Kaplan at 9:47 AM