Come on baby light my fire 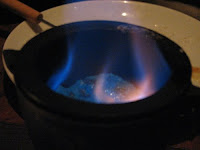 Whenever I encounter sterno, I'm reminded of the time my brother set fire to the curtains at Geja's. He was 11 at the time, and prone to such things. You'd think my parents would know better than to bring two kids to the restaurant voted "Most Romantic" ten years in a row by Chicago Magazine. It was a dark fondue lair, and some of the tables were surrounded by billowy curtains that concealed any fondue-induced groping.
We were sitting at such a table when my brother held a candle up to the diaphanous fabric and whoosh! Flames. Fortunately, my parents were lightning fast and the damage didn't interrupt the couple making out in the next enclave. We were never taken there again. Which is a shame because I love cheese fondue.
But there's a lesson to be learned here. Interactive dining - anything that involves sterno or cooking at the table -  is enthralling for kids. Maybe it's the inherent sense of danger, the idea that the table might ignite at any moment. Consider Benihana. The food's good but the highlight is definitely the onion ring volcano. The kids are just waiting for someone to scream, "Look out! She's gonna blow!" so that they can hit the deck.
Last night, we went to Hai Yen, a Vietnamese place on Argyle, which I highly recommend. They have the best Pho in town which, incidentally, is pronounced "Fuh" -  like "duh" -  which is what I said to myself after the waiter corrected me the first time I ordered it.  They also have volcano-shaped griddles fueled by sterno for cooking thin slices of meat marinated in garlic and lime zest. And who doesn't love softening rice paper in bowls of warm water and then making roll-ups with them? It's like arts and crafts, eating, and fire play all rolled up into one exciting evening. Cirque du Soleil's got nothing on this.
We also learned another valuable lesson: when the menu is in Vietnamese (or any foreign language for that matter), it's virtually impossible for the kids to complain that there's nothing here they can eat.
Posted by Wendy Kaplan at 9:43 PM