The mystery of the black sandwich 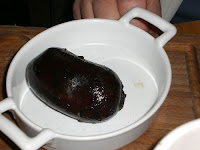 Today I was on KP duty for my daughter's kindergarten class. It was the Teacher Appreciation Day luncheon, so I volunteered, along with two other mothers, to supervise lunch and recess while the teachers got a break from our lunatic kids. I want to confess here that the only reason I did it was to be able to write about it (I know; I'm a bad mom). I thought there might be some important sociological or anthropological learning to be gleaned from the experience. OK, fine. I was hoping for a funny story, like a kindergarten food fight or a dropped bologna sandwich that resulted in a bologna slip-and-fall.
But there was nothing. No exploding ketchup packets or cheez doodles inserted in noses or even bad behavior. And let me tell you, I looked. I stared down those kids as they ate, looking for tics or nose-picking or anything that I could turn into a blog post. Nothing!
Then I discovered "Esteban." Esteban is a dark, quiet Spanish boy who looks like a future soccer player, although right now he is the size of a thimble. He was holding what appeared to be a normal sandwich. But upon further examination, I realized that between the two slices of white bread was something black. Not dark purple, like grape jelly. Not brown like....well, I don't know what would be brown. It was black.
I remembered a conversation I had with my friend, Michelle, who is currently living in Spain, about morcilla. Blood sausage. Its color ranges from dark brown to black.  Given that Esteban is Spanish, I was starting to feel relatively certain he was eating a blood sandwich.
I personally don't eat blood. I once saw Pierre Franey, a French food personality, eat an omelette in which congealed chicken's blood had been chopped up and folded in, much like one might fold in chopped mushrooms or spinach. The chicken had been decapitated and hung upside down over a plate. The resulting substance looked like dark burgundy jello. No, thanks.
To be fair, the sandwich filling could have been Marmite, which is a nasty, very dark brown British yeast spread. It's like the crotchety old crone version of deviled ham, with old man breath. Either way - blood sausage or Marmite - the mystery of the black sandwich and Esteban the blood eater lives on.
Posted by Wendy Kaplan at 1:16 PM