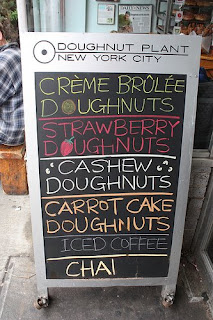 If I ever go to The Doughnut Plant, I will starve myself for days prior, so that I can have seven or eight donuts. Or maybe even nine. Choosing at The Doughnut Plant isn't like choosing at Dunkin' Donuts, where you have the choice between the donut-flavored donut and the other donut-flavored donut. At The Doughnut Plant, you can have a tres leches donut or a hazelnut donut or a square yeast-raised donut with homemade strawberry jelly filling and a peanut butter glaze (I would not choose this, but I appreciate those who would). 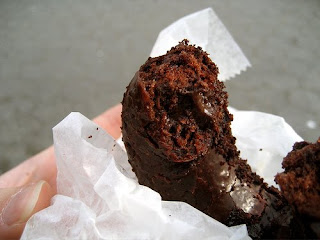 There are also two chocolate donuts: the Valrhona glazed and the blackout (above), which is a chocolate cake donut with chocolate pudding in the middle, rolled in chocolate cake crumbs. I would choose both of those, along with the creme brulee donut (caramelized sugar on top, brulee custard inside), the coconut cream, the meyer lemon, the pistachio, and for my finale, the yeast-raised strawberry glazed, mostly because the glaze is made with fresh fruit and I don't even know what that tastes like anymore. Then I would wash it all down with a quart of milk, and prepare myself for a long turn in the bathroom.
The guy who started The Doughnut Plant, Mark Israel, is one of those fanatical bakers who pulls all-nighters in the name of donut perfection. God love him. When he first started out, he worked in the basement of a lower east side tenement in New York, baking all night, then he'd hop on his bicycle and deliver his donuts first thing in the morning. People like this apparently don't need sleep. Ever. They run on sugar and caffeine and adrenalin and donut love. I could run on donut love, but only for a few days before collapsing in a sticky heap.
Now, there are several Doughnut Plants in New York, as well as a bunch in Tokyo (which explains all the Japanese signage I found when I was looking for photos). You can also get them at Dean and DeLuca's and Zabar's, which is all well and good except for the fact that I live in Chicago.
I know I'm going to get death threats for saying this but, I'm not crazy about Krispy Kreme. They always leave a filmy, chemically aftertaste that I find to be cloyingly annoying. Or is it annoyingly cloying? In any case, this may be due to the fact that I know I have options. I know that Mark Israel is pureeing strawberries as we speak, and roasting hazelnuts and working on all sorts of cool donut inventions (his square jelly filled donuts have holes in the middle and filling around the perimeter - love that!). 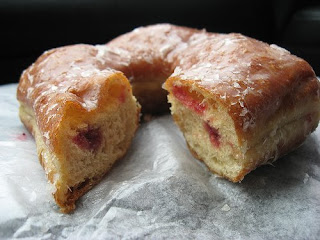 So while I might eat the Krispy Kreme kruller, I'll be dreaming about tres leches and Italian plum jelly and roasted walnuts, and wondering, why doesn't The Doughnut Plant plant one in Chicago?
Posted by Wendy Kaplan at 9:39 AM