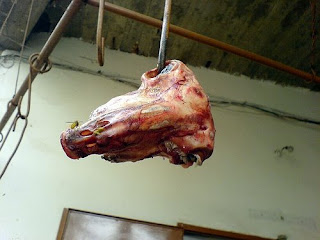 The kitchen can be a gruesome place.  That's one of the reasons why I turned to pastry. The most violent thing you do in pastry is zest an orange. Pastry is powdered sugar and squiggly chocolate lines and cupcakes. Pastry chefs never have to face roasting a calf's head.
At the beginning of my tenure at the restaurant, the pastry kitchen was under construction, so we all shared a kitchen. It was a great education for me, even if my savory comrades gave me unrelenting grief about my knife skills. One day, a very large box arrived with the shipment of meat. The sous chef, Jason, a big guy who was dog tired and unshowered most of the time, opened the box and inside was tete de veau. The head of a calf.
I learned more about Jason at that moment than at any other. He recoiled (flash forward a couple of years: Jason ended up as the regional chef of the Whole Foods kitchens, which is pretty much granola prep and grain salads). The truth is, most of us recoiled, with the remaining few in awe - a sure sign of their homicidal tendencies.
Jason had never taken on a head before, so he improvised. He lay the thing on a sheet pan and put it in a 400 degree oven, probably with a little salt and pepper, and a few sprigs of thyme. He then lay in wait.
There's something very unsettling about having a head in the oven. It isn't like a cake or a tart or a potato gratin. It has eyeballs that stare at you whenever you check for doneness. And enormous teeth. It was like Mr. Ed meets Ed Geen.
We all shared in Jason's anxiety, every time he opened the oven to peer in. The head was enormous, not quite as statuesque as a horse's head, but it took up the entire interior of a very large oven. Then there was the question that was on everyone's mind: how do you know when a head is done?
Jason pulled the huge thing out of the oven to get a better look. I was at the other end of the line, committing some unspeakably violent act on the Bing cherries. Out of the corner of my eye, I saw Jason bending over the head, poking and prodding. Just then, he let out a blood-curdling yet still somehow manly scream, and jumped away from the head.
Several of the cooks ran over to him. Jason's glasses were glazed with some sort of slimy film, and he was wiping his face with a towel.
"What the hell happened?" one of the cooks asked.
"The freaking eyeball exploded," Jason replied, pulling slime out of his hair. It's the old exploding eyeball trick. Good one.
Lesson number one when cooking a head: score the eyeball with a knife. If you don't, you risk getting sprayed with searingly hot eyeball juice when the eyeball explodes from the pressure build-up.
If you're wondering how tete de veau is served, I contend it doesn't really matter. Head meat is head meat, no matter how you disguise it.
Posted by Wendy Kaplan at 6:29 AM