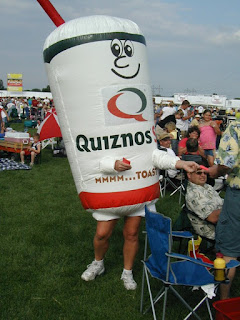 I think it would be fun to dress up like a beverage and dance on the off ramp of Interstate 94.  I saw a guy doing that over Memorial Day weekend. He was wearing a Quizno's beverage cup, and having what looked to me like the best time of his life. Dancing uninhibitedly on a public roadway is more of a fantasy for me, a crazy, unbridled, adolescent lark that would probably only happen if I was falling down drunk. But I can dream.
In a perfect world, I would be a sandwich. I like the things that go into sandwiches, and I like the idea that I could be a different sandwich everyday, with different breads and fillings. I could be a meatball sub one day and a turkey club the next. I could wear white bread or rye or a torpedo roll, which just might give me the few extra inches in height I've always wanted. Plus, sandwiches command respect, and when it comes to wearing a food suit, that's important to me.
I wouldn't want to be a slice of pizza. The point on the slice naturally falls between your legs and there are all sorts of issues with that, pragmatic and otherwise, starting with walking. Also, felt pizza toppings are terrifically unappetizing. I wouldn't want to be a slice of cake, either, probably because cake isn't inherently funny. Wearing a cake suit is just plain humiliating, just like wearing a baked potato suit or a sauerkraut hat would be humiliating. Personified hot dogs aren't necessarily humiliating, but they are cliched, and so are dogified hot dogs - wiener dogs dressed up as hot dogs. Plus they're redundant.
I wouldn't mind being a lobster. I'm not crazy about the antennae - they're akin to wearing an unflattering hat. But other than that, lobsters are delicious, they're red, which works well with my skin tone, and thanks to the pincers, I can pinch anyone who is annoying me. It's mostly win-win. Hey, as long as my dignity remains in tact, I'm pretty much up for anything.
Posted by Wendy Kaplan at 10:41 AM