Iceland is for masochists 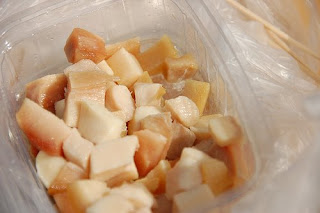 In case you're wondering, hakarl is putrefied shark. Pronounced how-kurl, it's an Icelandic delicacy that's served on toothpicks during the mid-winter festival, Thorrablot. What better way to celebrate the solstice than with a rotten cube of fish on a stick.
I looked up "putrid" because it's one of those words that I use so infrequently, I wondered if it really meant what I thought it meant. Yep, it does: foul, rotten, morally corrupt, totally objectionable. Not exactly the kind of words you'd want to describe the hors d'oeuvre you're about to pop in your mouth.
But I'm trying to keep an open mind.
The state of putrefecation is achieved thusly: a shark is caught, and although this is an Icelandic dish, the species that's most often used is a Greenland shark. It's notoriously ugly, and poisonous if eaten fresh, 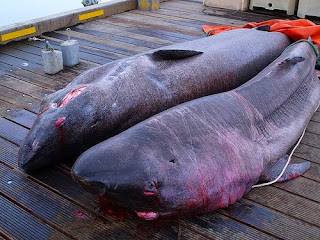 so the shark is gutted, and then buried for six weeks or so in a gravel pit, and then dug up and cured for another two months in the air, to rid it of its toxins. Did I mention that it is now putrid?
A brown crust (scab unfortunately comes to mind here) that has developed during the putrefecation process is removed and the flesh is cut into cubes and eaten. The taste, according to one article I read, is like "solid urine."
Let's get something straight right now: I am not trying this. I am not going the way of lutefisk, where I scouted out a Scandinavian delicatessen and purchased the lye-cured fish, only to have my house reek like a neglected fishery on the Northern Coast of Norway. I will not subject my family to the stink of four month old rotten shark meat just to prove I have havkarl cojones comparable to those of Anthony Bourdain, or any other culinary masochist.
I happen to be deathly afraid of sharks - even when I'm swimming in a chlorinated pool. I think the fear stems from Largo's shark-infested death pool in the James Bond movie, "Thunderball." I have, at times, been jolted out of a routine lap swim at my health club pool by a shadow in the water, thinking in all seriousness that it was a shark. Eating rotten shark meat that tastes like solidified urine conjures up a different kind of fear and also an incredulousness because many countries have done national fish dishes very well.
Take Great Britain. Fish and chips are delightful, particularly with a splash of malt vinegar and a pint. France has brandade de morue, or salt cod puree, which could have turned into a smelly national disgrace, except for the fact that the French are gastronomically brilliant at times, and know that when you add garlic, potatoes and cream to anything - even salted cod - you have yourself a winner.
Then there's us. For our national fish dish, we have what? The Filet-o-Fish? Perhaps a national disgrace, but I'll take a slab of deep-fried fish - even of questionable origin - on a tartar sauce-soaked hamburger bun over putrid shark meat on a toothpick any day of the week.
Posted by Wendy Kaplan at 4:20 PM