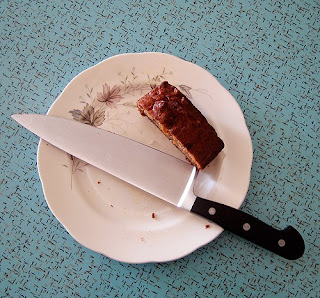 If you're going to equip an entire room full of people with a variety of sharp knives, it would be a good idea to know beforehand if any of them is the second coming of Richard Ramirez.
There were two morning bakers in my former pastry shop, Floresmilo and Julio. Floresmilo, Flores for short, was a small, Mexican version of Dick York, but without the perpetually flummoxed look on his face. He was an even-keeled workhorse, turning out hundreds of pounds of cookies, muffins and breakfast pastries every day.
Julio was another story. He was the seasoned elder of the kitchen, probably in his early 50's. He never spoke. Ever. He was tiny, too - Michael J. Fox tiny - and he had a head of wild, gray Beethoven hair. He walked around the kitchen, sharpening his knife on his steel, grinding it down, while he stared at the other bakers. It was a little unnerving, but I didn't think much of it at the time; I had a thousand pounds of buttercream to make.
Julio also used to pull hot sheet pans out of the oven with his bare hands. If you want to know whether someone is a sociopath, here's clue #1: They feel no pain. If your hands can serve as oven mitts, I'm willing to bet you're a sociopath.
Clue #2: They stare everyone down, as if they're trying to imagine what each person might look like dead or decapitated.
Clue #3: They corner you in the walk-in early one morning and profess their love for you. In an insistent way. And they won't take 'no' for an answer.
And that's what happened to me, early one morning, in the refrigerated walk-in. I was looking for tart fillings, which is what I did every morning. At 5:30 AM, of the several million synapses that fire away information in my brain, only about 40 are actually working. It was just enough to get the various fillings straight. Brulee, lemon curd, milk chocolate mousse and white chocolate mousse.
So I was hardly even aware when Julio came into the walk-in. I had a couple gallon containers in my arms and was on my way out when he stepped in my path. He looked straight at me and said, "I love you."
My mouth was probably agape. Wha? I had never even spoken to this man. And then surprisingly quickly, honors Spanish kicked in. Or rather, it didn't kick in because only 40 synapses were firing. So here's what I managed to say: "Tengo un novio." I have a boyfriend. What I really wanted to say was "Get the fuck out of my way, you tiny little motherfucker, or I'll kill you," or something to that effect. Those are the kinds of things that come to mind when you're cornered in a virtually airtight, dimly lit walk-in at 5:30 in the morning.
He was speaking English to me, and pretty well, I might add, so I'm not sure why I kept saying, "Tengo un novio, tengo un novio." Especially because I had more than a boyfriend, I had a husband who happened to be 6' 2", and that's what I should have said. "Get the fuck out of my way, you tiny little motherfucker, or my 6' 2" husband will kill you."
Then he said it again, "I love you," along with, "I want to take you on a date." The more I shook my head and followed it with "No," the more he proclaimed his desire to date me. I finally pushed my way past him, and got out.
Several things were going through my head: I could probably take him, he's pretty small; should I grab a knife and if so, which ones were most recently sharpened? I felt threatened by this tiny sociopathic Beethoven with asbestos hands. So I consulted Rafael, the head baker, who acted as language go-between in the kitchen. I told him what happened and asked him to explain to Julio that I was married, etc, etc...
There was definitely some awkwardness because of having to be in the same room with him for 12 hours a day, but I thought it was over. Then about a month later, it happened again. He cornered me in the walk-in and told me he loved me. Again, I consulted Rafael.
Then I started carrying scissors around with me, not in the kitchen, but in the dark maze of hallways that led to the bathrooms and the adjacent supply room. I had my husband pay a few visits, just so Julio could feel his presence. And as luck would have it, I had given notice a month earlier, so my days there were numbered anyway. I kept the scissors close right up until my last day.
Four years later, I was home one night with my husband and the phone rang (doesn't the phone always ring in stories like this?). I was six months pregnant with my first kid. My husband answered the phone and then said, "Just a minute, please." He handed the receiver to me.
"Hello?"
"Wendy, this is Julio. Do you remember me?" It only took me a split-second to remember everything. Now all million plus synapses were firing away.
"No, I don't," I said, and I hung up.
I still don't know how he found me. He left the pastry shop soon after I did four years earlier, and no one had seen him since. He's probably still out there today, the man with the oven mitt hands. I think I could probably take him.